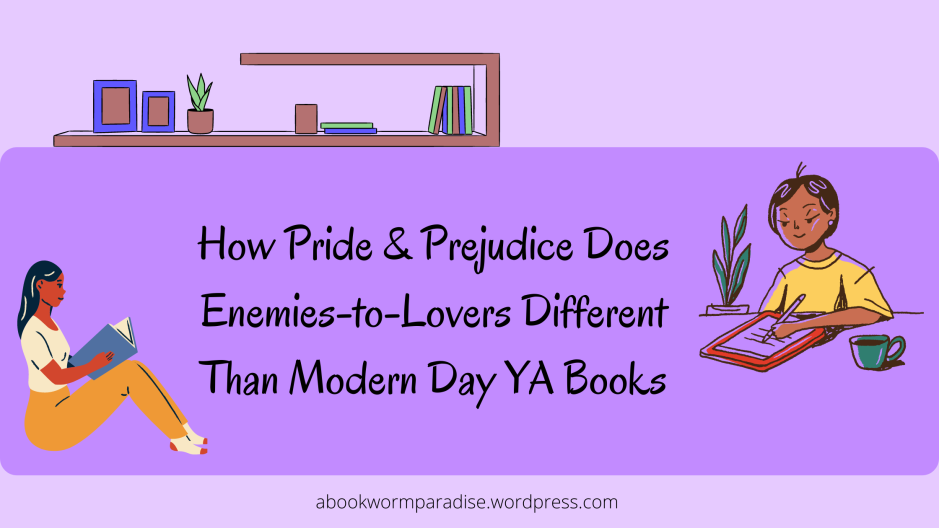 It is a truth universally acknowledged that Pride & Prejudice is THE enemies to lovers book— in the sense that it was published much before all the 21st century novels with this evergreen trope.

But then the question arises, is enemies to lovers really evergreen?? Personal and probably unpopular opinion alert: I feel, especially in the last few weeks when I’ve been on a YA contemporary binge (owing to the summer-y weather, obviously), that this trope is slowly being diluted in newer releases and/or being forced upon the story without any apparent reason.

No hate on the trope obviously, quite the opposite. It is, in theory, one of my favourite tropes, my one true weakness, the cause of something going into my eye and causing it to water (i’m not crying you’re crying) while reading and the reason for my poor half bitten nails.

And there have been plenty of books which have executed it in ALL of it’s glory if not more (*side eyes These Violent Delights, Six of Crows, We Hunt The Flame etc*), Pride & Prejudice included, so please note that I’m definitely NOT referring to these books when I roast certain aspects of the 21st century adaptation of enemies to lovers.

Lately I keep finding new releases (thankfully, the number is still much lower than the books who have brought it honour) with character relationships that almost bring shame to the grandeur of our beloved trope. And after having spent 11 hours of my life listening to P&P and rooting for Elizabeth and Darcy all those hours more than I’ve probably ever rooted for someone, I feel more than *ahem* accomplished to compare the execution of enemies to lovers in this majestic classic to the one in recent YA novels.

In true loving-anything-with-bullet-points fashion, a list of some of the merits of enemies to lovers in Pride & Prejudice!

Note: This does not contain any major spoilers so even if you haven’t read Pride and Prejudice, you’re all good! In fact, I might just convince you to read it by the end of the post ;))

There’s a compelling and realistic build-up to the tension. There are actual, legitimate reasons why our main couple dislike each other. They get off on the wrong foot because Darcy is seen as unpleasant and arrogant and Elizabeth as a lowly girl having poor connections by the other. Circumstances further heighten Elizabeth’s dislike— gossip about him having been cruel, his interfering in her sister’s marriage etc.
Certainly not like some books where random people look at each other the first time and declare the other to be their sworn enemy after NO conversation at all and like zero reason except for the fact that the author thought “oh the people like enemies to lovers?? let me force squeeze it into my book somehow”. I kid you not, this ACTUALLY happened in a book I read *cough* tokyo ever after *cough*

There’s a long period of time for feelings to evolve, and it’s actions that cause them to reconsider their initial hatred. The entire shebang of Lizzy and Darcy meeting and finally getting together spans about a year I think. Also, they were frequently miles away and not staring each other in the face ALL THE TIME. And it was after Darcy’s sudden change in behaviour, the clearing of the bad name that had been put on him that Elizabeth began to doubt whether he deserved her disregard. So just like there were reasons for them to hate each other, there were also valid reasons for them to overcome the hate.
The eternal conundrum in YA, I find, is how to make them fall in love? The answer apparently has not yet been discovered. Usually it’s a few days of forced proximity, one sudden kiss and BOOM they’re in love. Like girl he’s exactly the way he was before so why do you suddenly like him?? (*cough* not here to be liked *cough*)I now almost believe proximity will make anyone fall in love with anyone. (Well considering the situations authors put their characters into where they have to be near each other the entire time, I guess it’s not really the characters’ fault. I mean, I’d “fall in love” with my sworn enemy if it meant I could go atleast an hour without having to see their stupid face soo)

The absence of physical intimacy further brought out the chemistry between them. (a huge thanks to kaya @afictionalbookworm for suggesting this point!) It wasn’t like they could even touch each other because propriety and all BUT. Instead of lessening their chemistry, this “fallback” enhanced it because we could actually see their bond in their words without it having to be obvious with them getting physical. I’d call it a win for Miss Austen.

Society required that they be civil to each other. And boy was it entertaining to watch. Sure, we all love sassy banter and knife-to-throat scenes, but being forced to be polite and exchange pleasantries with someone you hate?? It was almost equally entertaining. Though I felt a little guilty sometimes for enjoying their immense discomfort, Elizabeth’s polite badassery and Darcy’s deadpan and brutally honest statements got me through it.
For once it was not like our “enemies” could actually kill each other (fantasy novels, looking at you) or even exchange outright insulting words and this was, surprise surprise, actually refreshing.

The couple did not always reciprocate each other’s sentiments. For some reason I haven’t seen a lot of one-sidedness in modern YA?? The couple are generally unanimous in their enemity and unanimous in their love declarations later. In P&P however, we have hate at first sight from one and a general dislike but of much less intensity from the other at the beginning. Then there’s a growing but unrequited affection that is only returned at the very end of the book. And yeah, this actually sounds more realistic than what we see in YA, because I don’t think when someone says “I’ve always loved you” the other ALWAYS replies “oh yes I have too”. Rejection exists dude. Even Mr. Collins knew that.

Have you read Pride & Prejudice?? What did you think of Lizzy and Darcy’s relationship? Do you also feel like some of the recent YA releases are not entirely doing justice to enemies to lovers?? Let’s have an open discussion in the comments! 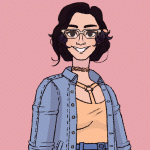